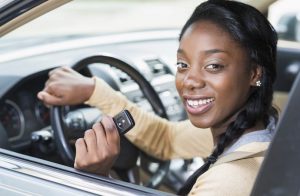 Wednesday.
It wasn’t quite ten minutes after the journey to Berger commenced that I heard sniffing from the back seat. A slight headache from reading till late was why I’d left the radio off, which meant the sound carried quite clearly to my ears, but being at a red light meant I could steal a peek over my shoulders.

Something was obviously wrong because the passenger was bent over with his head in his hands, a man who had been smiling when I picked him up at Oregun. Usually, I would mind my business, but I guessed something had to be seriously awry for a man to be crying publicly in a taxi, so I ventured to ask.

“Sir, are you all right? Is everything okay?”

He raised his head, and his red eyes were all I needed to see. The car behind me, however, honked impatiently for me to move, so I returned my attention to the road and surged forward.

The next thing I heard was a wail.

“God will punish you, Christy! God will surely punish you.”

Then he started sobbing aloud.

“Ah, one of the sisters has done this one a strong thing,” I thought with a silent chuckle.

He kept sobbing, and it got so bad and distracting that I had to park and try to do some damage control. Out came the box of tissue in my pigeonhole, and after blowing his nose a few times he settled down enough to tell me his story.

Mister is a twenty-seven-year-old American trained Telecoms Engineer with one of the Telcos. An only child, he had a girlfriend, Christy, whom he’d been dating for a few months. According to him, they started out as friends with benefits and all was groovy until he fell in love and let slip that he would like to take things a bit further. That was apparently a wrong move because Christy immediately calls off their relationship. Mister pleads and pleads but nothing changes, and desperate as he is because he actually intends to marry her sometime next year, Mister calls up his only confidant, mom, and begs her to help convince Christy of his good intentions.

Now, this is a tall order, because, mom is a jet-setting fifty-five-year-old businesswoman who rarely visits Nigeria. She hasn’t been around more than thrice since the death of her husband, mister’s father, two years ago, but he goes ahead anyway.

Mom eventually agrees to come in from London and intercede for her only son. After a week’s delay, she arrives Nigeria, concedes to stay only for four days, and schedules a meeting with the wantaway Christy. After three days of intense ‘negotiations’, she calls mister up and tells him to find another girl, because according to her, “this one is a lost cause.”

Mister sobs his heart out, says thank you, and trusting implicitly in his mother’s judgment, decides to move on, especially as Christy has blocked him on all social media and stopped taking his calls. Mom then says she will stay in town for another month to nurse him through the heartbreak. He profusely objects, but she vetoes his rejection.

Fast forward a few months from that time, and it is Christy’s birthday. Mister, who all this time is still in love and isn’t dating anybody yet decides to surprise her with a visit. He packs a diamond chain he’d ordered from Dubai earlier which arrived after their breakup, red velvet cake which he knows is her favorite indulgence and a giant white teddy bear and drives to Christy’s place in Lekki.

Christy lives in one wing of a twin duplex in a gated estate. Luckily he still has his access sticker so he is allowed in without anyone calling her up as is the norm. Feeling fortunate, he eagerly cruises to her street, only to find a strange car in the driveway beside hers.

Having been in the game long enough, mister knows exactly what the presence of the second car means. Crestfallen, he decides to go in all the same, if only to drop his gifts, so he pars across the street, lets himself in at the gate; and finding the door to her apartment ajar, pushes it inwards and steps inside.

Right there on the white marble of the sitting room floor, as naked as the day they were born, lost in the throes of passion, oblivious to the world and wriggling like two conjugating worms, was Christy and his dear mother.