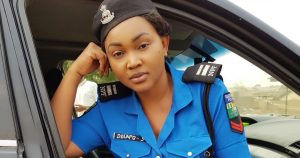 ‘That’s Kayode,’ Tara said to herself as she quickly crossed over from the other side of the road where she had been waiting for her cab to arrive. The headlights blinked twice to show he’d seen her, but the car drove right past and straight into his compound.

She followed him in just before the gate rolled shut.

Switching off the engine, Kayode threw the door open and jumped out of the vehicle, then raced to a corner of the compound and started tearing off his clothes as if they were on fire.

‘Haba, Kayode, what happened to you,’ Tara asked as she walked up. ‘I called and called but…’

‘Not now baby,’ he retorted, shaking his head as he stripped. ‘I’ll explain everything later, but not now.’

Stunned into silence, Tara froze and watched as he continued to undress until he was stark naked. Being the sole occupant of the compound meant there was no other witness to the absurd drama.

She continued watching as he marched to his door and disappeared inside, and was about to follow in his stead when he suddenly emerged again with a box of matches and a yellow jerry can. Striding purposefully back to the small heap of garments, he unscrewed the jerry can and sprinkled some of its contents on the discarded clothes.

Her nose caught the smell of kerosene.

When he was satisfied with the quantity dispensed, Kayode dropped the container a safe distance away and returned to the heap, struck a match and dropped it, then deftly stepped back from the resulting ‘whoosh’.

Yellow flames were dancing without restraint when he finally turned his back and headed back indoors.

‘But what happened, Kayode? Please, talk to me. Since you came back from your outing you’ve been acting funny. First, you strip outside and burn all your clothes. Then you spend ages in the shower, scrubbing your entire body as if you want to peel your skin away. I still don’t have a reason for your missing our appointment. What exactly is going on?

They were seated in Kayode’s living-room, and he was now dressed in a blue bathrobe that smelled of lavender.

‘I’m fine baby. I swear, I am. Everything is fine, although I can’t tell you what happened just yet, but, I will, and soon too. Until then, just humor me. Please.’

‘Are you sure?’ Tara asked.

‘Yes, I am. Trust me on that,’ he responded and smiled reassuringly.

‘Not tonight,’ he quickly interjected. ‘I don’t think I can handle any driving again today. Order an Uber to take you home, on me, I’m sorry. I’ll make it up to you later.’